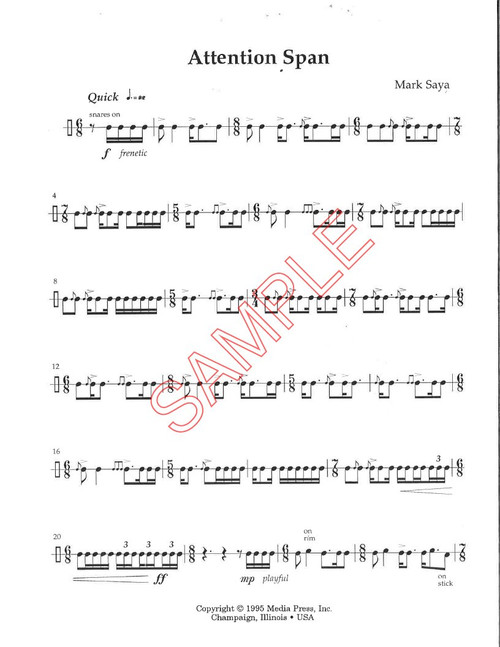 For solo snare drum, includes score. This theatrical solo for snare drum affords the percussionist an opportunity to "stretch" his or her acting skills while demonstrating technical control and musicianship. An ideal recital piece that will quickly break down any barrier between performer and audience. Lots of fun! Duration: ca. 4'

“Attention Span” is a theatrical piece for solo snare drum. It allows the performer to stretch his or her acting and drumming skills. A snare drum, music stand, and a number of props are needed to perform this work. The performer enters, sipping on a soft drink. A number of unsuccessful attempts are to be made to start the piece. Giving up, the performer finds a newspaper, sits down, and flips through the pages. A few more unsuccessful attempts at the piece follow. The performer then sits down again, turns on a television, and flips through the channels. Dissatisfied with the TV options, the performer turns off the set and considers attempting the piece again. Instead of playing a single note, the performer starts folding socks and places them in a drawer. The piece is attempted again, and successfully played in “complete abandon.” The performer then walks off stage, finishing the drink, and crushing the can. The snare drum solo itself is challenging due to the constantly changing times signatures, including 5/8, 6/8, 7/8, 8/8, and 3/4. Various textures are used such as playing with the snares on, snares off, and playing on the rim of the drum. The complete runtime is approximately four minutes. While the acting definitely adds to the piece, the snare solo itself is challenging due to the constantly changing time signatures. This work will add a bit of levity to a recital, while requiring a serious degree of musicianship.