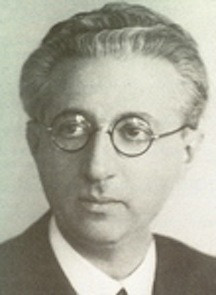 Ernst Kanitz was born April 9, 1894 in Vienna. He studied law at the University of Vienna (J.D. 1918), but continuously devoted himself to the systematic study of piano, theory and composition with Richard Heuberger (1912-1914) and Franz Schreker (1914-1920). Early successes as composer (principally the premiere of the oratorio "Das Hohelied" in 1921) aided his musical career, which also led to teaching. Beginning in 1922, he was a Professor of Theory and Analysis at the New Vienna Conservatory and had numerous private students in composition. In 1930 Kanitz founded the Vienna Women's Chorus, with which he brought new choral music to the public in Vienna, Paris, Brno and Budapest. The chorus remained in existence until Kanitz's emigration to the United States in 1938.

Kanitz was not alone when he came to the United States in July 1938. His wife, Getrude Reif, came along with their three children, Elizabeth (born ca. 1922), Tom (born ca. 1924) and Mary Bridget (born ca. 1926). Gertrude must have also been interested in the study of music, as many of the music scores in his collection originally belonged to her during the 1910s. Despite the complications that undoubtedly were involved in uprooting a family of five, they seem to have settled in quickly to a home in South Carolina. Also in 1938, Kanitz embarked on the first step in an extended teaching career, first at Winthrop College in Rock Hill (1938-1941) and then as Head of the Music Department of Erskine College (1941-1944). He also appeared as conductor of various women's choruses and student orchestras. By the early 1940s, almost all members of the family had obtained American citizenship. In 1943, Kanitz's daughter Elizabeth married an American soldier, and his son Tom joined the Army and worked as a photographer throughout World War II.

Things changed significantly for Kanitz after his wife passed away from Hodgkin's disease in 1944. Soon afterward, he went to Los Angeles in the summer of 1944. While it was initially intended to be a short vacation, after a brief time in the city he decided instead to resign from his position at Erskine and try to make a living as a composer and teacher in Southern California. His youngest daughter, Mary Bridget, joined him and found work in Los Angeles. It was a difficult first year as Kanitz tried to establish a career in the highly competitive field of film scoring, and he lived mostly off of some freelance work and private music lessons. But his persistence and diligence prevailed by 1945. When Ernst Toch took the summer off from teaching at USC due to illness, Kanitz was invited to take his place. By November 1945, he was appointed to the faculty at the USC School of Music, where he taught composition and counterpoint until his retirement in 1959 (he returned as a guest professor there in 1960/1961).

From 1961-1964 he taught at Marymount College in Palos Verdes, California. He then devoted himself exclusively to private teaching and composition, activities which were severely restricted in 1967 by diminishing vision. Kanitz died in Palo Alto, CA in 1978.