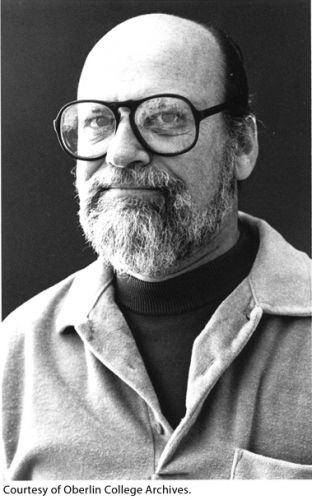 For Edward J. Miller, the motivation for writing music came mainly from performers. During his 27 years on the Oberlin College Conservatory of Music composition faculty (four as chair), he was stimulated by the talents of colleagues and students. His most frequently-performed composition, “Piece for Clarinet and Tape,” was written for clarinet professor Lawrence McDonald. “Beyond the Wheel” for violin and tape, a piece praised by New York Times music critic Allan Kozinn for its “shimmering otherworldly texture,” was inspired by a dramatic passage from the Book of Ezekiel and written for Oberlin faculty violinist Gregory Fulkerson. Both tapes were created in the Oberlin electronic studio, where Miller worked closely with composer Gary Nelson. Another fellow faculty composer, Randolph Coleman, came up with the title for Miller’s orchestral piece, “Anacrusis.” The musical term for “pick-up notes,” the title acknowledged the borrowing of fragments from works by Ravel and Mahler that followed the world premiere of Miller’s piece on a concert by the Hartford Symphony.
Composer-conductor Edwin London, 1982 Cleveland Arts Prize winner and founding music director of the Cleveland Chamber Symphony, characterized Miller as a composer who made “music out of music,” a reference to the recycling of themes or ideas from previous generations. Newark Star-Ledger critic Paul Somers, reviewing Miller’s tone poem “Images from the Eye of a Dolphin,” admired the composer’s “ear for exact color differences” and “care for precise sonority.” Although most of his music is upbeat, Miller regards his doomsday piece, “The Seven Last Days” for chorus, orchestra, film and tape as his masterwork.
Before joining the Oberlin faculty in 1971 at the invitation of composition department chairman and 1980 Cleveland Arts Prize winner Walter Aschaffenburg, Miller completed several pieces that were performed by major orchestras, including the Berlin Philharmonic and the Cleveland Orchestra. By the time he retired in 1998, he had written about 70 works and received numerous commissions and awards. His music is published by Bote & Bock (Berlin), McGinnis & Marx, Music for Percussion, Ione Press, and Associated Music Publishers; and recorded on CBS, Orpheus, CRI, Opus One, New World Records and several other labels.
Born in Miami, Florida, on August 4, 1930, Miller started music lessons at age 10. His first instrument was trumpet, but he switched to valve trombone and baritone horn when he was required to wear braces on his teeth. At 16, he began playing in a professional jazz band. Midway through his undergraduate studies at the University of Miami, he took a year off to tour internationally as an arranger with Miguelito Valdez and His Orchestra. After earning a bachelor of music degree, he received a Koussevitzky Prize to study with Mexican composer Carlos Chavez at Tanglewood’s Berkshire Music Center. Aaron Copland, who had recommended Miller for the prize, later named him one of the “young talents whose music commands attention” and helped him win a Fulbright Fellowship to study with Boris Blacher and Josef Ruter in Germany.
Miller earned his master’s degree in composition at the University of Hartford’s Hartt School of Music, where he studied with Arnold Franchetti and Isadore Freed, and served on the faculty for 12 years prior to his Oberlin appointment. Following his retirement, Miller stayed in Oberlin until 2005 when his wife Judi stepped down from her post as a professor of psychology. The couple then moved to Las Cruces, New Mexico, where they have a new home with a magnificent view of the snow-capped Organ Mountains.