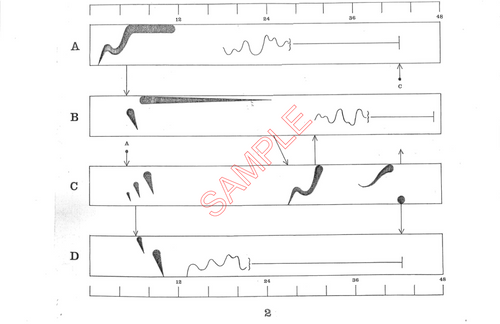 Subtitled “For any four musicians who like to improvise,” this work was composed in 1972 and gained popularity when recorded by the Blackearth Percussion Group in 1974. Presumably only available in manuscript form before now, Media Press Music has published this edition as a photocopy of Edward Miller’s original notation and performance instructions.

The work consists entirely of graphic notation and is open to performance by any instrument or voice. Divided into six pages (each equaling about 48 seconds), each player is assigned a specific line of music to play (designated A through D). Miller gives explanations of how graphic gestures relate to speed, dynamics, intensity, and duration, leaving everything else “to the discretion and good taste of the musicians.” Perhaps most helpful is the system of arrows Miller uses to indicate how the entrance and cessation of each gesture is cued by another player. While this aspect of ensemble communication could certainly be worked out in rehearsal, the composer’s addition of such markings will help performances to feel more organic and intuitive.

In 1973 Miller began including slides of the score that can be projected onto a screen for performers and audience members to follow. Media Press Music has accommodated this by including a CD-ROM of these images. This addition will certainly help in allowing performers to explain and involve the audience in understanding this unique approach to composing and performing music.

Bowers, Stacey- Pattern Study No. 2 for any number of musicians playing any pitched instruments (Digital Download)

Miller, Edward- Inside Out, Outside Out, for four violas or four marimbas (Digital Download)

Miller, Edward- Inside Out, Outside Out, for four violas or four marimbas

Percussion: A Course of Study for the Future Band and Orchestra Director - 2nd Edition - Instructor's Manual

Percussion: A Course of Study for the Future Band and Orchestra Director - 2nd edition - Student Workbook

Albert, Thomas- A Maze (With Grace), for indeterminate ensemble

Albert, Thomas- ...And It Comes Out Here, for indeterminate ensemble