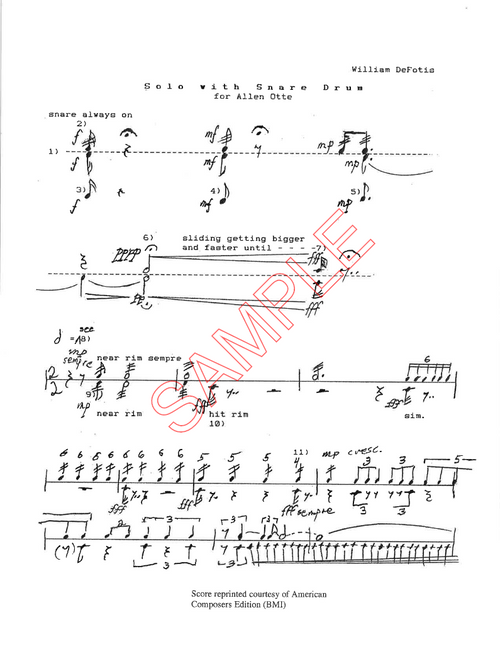 There is a significant difference between a piece written as a solo for snare drum and a solo with snare drum. The current repertoire falls much more frequently in the first category, including incredible works idiomatically perfect for challenging performers technically and musically.

William DeFotis wrote his solo snare drum piece “Solo with Snare Drum” to represent a much more primitive approach to percussion. Starting with scraping and scratching with sticks, the piece eventually unfolds until finally ending with fingernails and hands on the drum scratching and rubbing the head.

“Solo with Snare Drum” is a four-minute work that would fit nicely inside The Noble Snare collection alongside the composer’s teachers and influences. DeFotis was an American composer who studied with Herbert Brün, Ben Johnston, and Morgan Powell. Along with his connections with the University of Illinois, he conducted at the Cincinnati College-Conservatory of Music, creating the connection with Allen Otte, for whom this work—his only known solo percussion composition— was written in 1991.

The piece is composed in four main sections, with 23 different instructions to help clarify notation and details within the three-page solo. Beginning with an introduction of scrapes and rim strikes, the solo moves into the next section by adding a written-out rallentando emphasizing rim strikes to help propel the phrase. This is repeated with an actual roll on the drum, slowing down and then speeding up. The third phrase contains more interplay of rhythms and durations, while the last phrase ends with nail scrapes into a polyrhythmic, tremolo passage played by thumb or finger rolls on the drum until the piece dies away.

DeFotis’s work requires a mature understanding of duration and extended techniques, making it more of a sound study than snare drum solo. For those looking for a different kind of snare drum solo, “Solo with Snare Drum” might be the perfect fit for the next recital.

Macbride, David- As Before, for solo marimba (Digital Download)

Albert, Thomas- No Chance, for percussion ensemble of at least six players