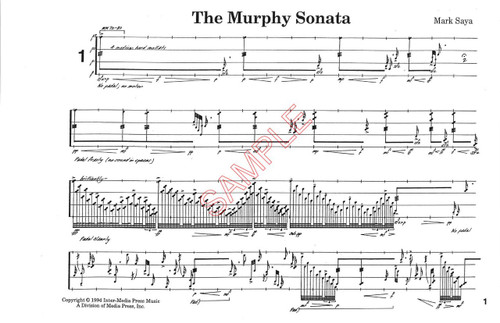 For solo vibraphone, includes score. A wild, theatrical work for the vibraphone soloist, with great visual and aural effects. Knitting needles, five pennies and forty ping -pong balls are used along with more conventional vibe mallets to produce the sounds and sights that will captivate any audience. Duration: ca. 16'

This vibraphone solo is in four movements and is very aleatoric. Rhythms are notated over a four-line staff. Each line represents the four F’s of the vibraphone, and the approximate pitches are indicated by their placement between the lines. A few sections have a pitch set indicated, in which case the performer can choose from any of those pitches in any range of the instrument. Rhythms and tempo markings are generally notated, with a few sections requiring the performer to improvise the rhythms. This work requires some very fast playing and the ability to move around the vibraphone quickly. It also includes quite a few extended techniques, including covering the keyboard with carpet, placing pennies on the bars, pitch bends, playing with knitting needles and drumsticks, ripping up paper, and dumping a box containing at least 40 ping pong balls over the instrument. The fourth movement also involves eight singers placed throughout the audience to accompany the performer. This work would be great for a 20th-century music concert, a fun addition to a graduate-level recital, and enjoyable for anyone interested in that style of music and in performing with extended techniques.