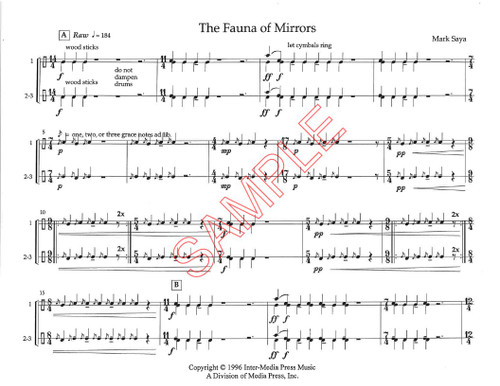 For percussion trio, includes score and parts. The Chinese tell of a time when the world was inhabited by independent creatures. On one night, the mirror beings invaded the earth. The Fauna of Mirrors is a movement from the suite based on entries from The Book of Imaginary Beings by Jorge Luis Borges. A new engraved score comes with separate parts for ease of performance. Composer, Mark Saya, "makes his effects by a few well-chosen timbres deployed in space and across silence with a precise control of rhythmic eloquence and of small but telling color changes." (The New Yorker)

"The Fauna of Mirrors" is a trio scored for seven tom-toms, two bass drums and three Chinese cymbals. The three players share several of the tom-toms and bass drums, forming a setup that is interconnected from player to player. The work begins with relatively slow rhythmic figures placed on larger canvases of silence. Eventually, part one breaks away from parts two and three, which remain in unison for the duration of the work. Part one is somewhat soloistic, with frequent rolls (double stroke) and dynamic shifts. The work becomes gradually more intense as the rhythms of the solo part become increasingly dissonant with the rhythms of parts two and three. Toward the end of the work, the players are asked to yell as they strike the Chinese cymbals, adding to the overall visceral quality of the work. This piece would make an exciting opening or ending to a percussion ensemble concert.