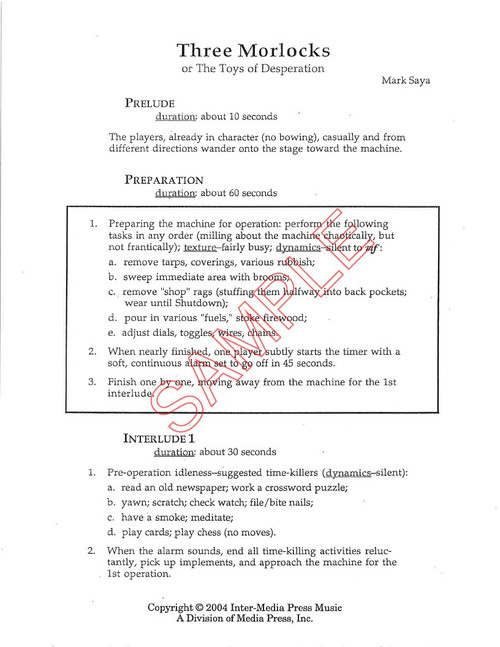 For percussion trio, includes score. Three Morlocks, or The Toys of Desperation, is a movement from the second suite of percussion trios by composer Mark Saya. Action and sound depicts the remote future as evoked by H.G. Wells when humankind is divided into two species: The Eloi and the Morlocks. The latter, a subterranean race, work intricate, malfunctioning machines below the surface of the earth in darkness. Instrumentation consists mostly of found objects players use to create a music that evokes this Draconian underworld.

Review from Percussive Notes for Three Morlocks and Tigre Capiangos:

These two releases for percussion trio reveal the composer’s interests in folklore and literature, and from a musical standpoint, his preference for an exotic instrumentation. Both pieces were originally movements from his second suite of percussion trios. The “tigre capiango” is “a legendary being encountered in the midland provinces of Argentina,” who is either a jaguar that can “transform itself into a man,” or a man “who can take the form of a jaguar.” The single-movement ”Tigre Capiangos and the Sect of the Brujeria” was inspired by a description found in Bruce Chatwin’s book In Patagonia of “a malevolent brotherhood of warlocks” with the power to change themselves into animals. Saya’s instrumentation will pique the interest of percussionists looking for new modes of expression. It includes a large tam-tam, large vibraslap, metal sheet, a micro-xylophone and micro-metallophone (both homemade, with 17 microtonal bars played on the floor from a kneeling position). Each player also uses two six-foot bamboo stamping poles struck on the conductor’s podium. The piece is set in one single, non-stop movement, sectionalized into three parts, plus a coda. It captures a primitive, ritualistic ambience. (The composer suggests performing the piece in near darkness to enhance its “ominous ritual aspect.”) A basic eighth-note groove is maintained throughout, in a “primitive, urgent” setting at a tempo of a quarter note = 152. The score is characterized by changing meters with denominators of “8” including 21/8, 29/8, 37/8, 45/8, 53/8, and the last measure, 61/8. A climactic passage marked “violent, savage and raucous” is embellished with rapid sixteenth-note runs in the micro-metallophone. Saya’s “Three Morlocks or The Toys of Desperation” transports us to a future world described by H. G. Wells, in which the Morlocks, a subterranean race, toil in darkness, working “intricate, malfunctioning machines.” Once again, Saya draws upon an imaginative instrumentation used in a large setup, aka “the machine.” It features found objects such as tin cans, chains, glass bottles and an automobile jack mounted “in, on, and around a metal and wood framework,” played with an unusual assortment of implements such as chunks of rock and brick, brooms, hammers and crowbars. A performance of this piece requires three players with the ambition and ingenuity to construct the large instrumental setup as well as the inclination and ability to act and follow a number of stage directions calling for a variety of emotional responses such as “looking startled and frustrated” and “kicking the machine in anger.” (The composer suggests the possibility of adding a fourth, fifth or even sixth player.) These two ensembles are examples of the sort of imaginative composition that contributed to the increase in significance of percussion music during the latter half of the 20th century. Either would make an excellent addition to the chamber music repertoire of an advanced collegiate ensemble.

Blatter, Alfred- A Study in Time and Space