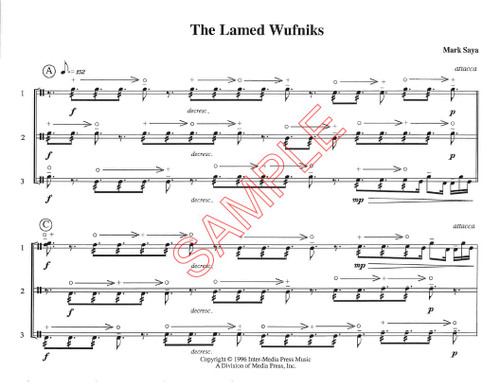 For percussion trio, includes three scores. The Jews have a legend that, at any given time there are 36 righteous men on earth for whose sake the rest are spared. These are the lamed Wufniks. They are poor men of no consequence in the confusion of worldly affairs. If a Lamed Wufnik ever learns of his significance, he immediately dies, to be replaced by another somewhere else on earth. The Lamed Wufniks have no apparent power, but it is due to them that God refrains from destroying the world.

“The Lamed Wufniks” is a trio for non-pitched percussion instruments written in 1985. The work is based on a Jewish legend of the same name, which states that 36 righteous men inhabit the earth and whose existence spares all others. According to Saya, “If a Lamed Wufnik ever learns of his significance, he immediately dies, to be replaced by another somewhere else on earth. They have no apparent power, but it is due to them that God refrains from destroying the world.”

The piece is supplied in score-form only and is divided into seven lettered sections. While this suggests the sections are to be performed in alphabetical order, they are not notated as such. For example, section A is followed by section C, followed then by sections B, D, and F. Because the end of each section is marked “attacca,” I presume Saya wants the lettered sections performed in this fashion. It also reminds me of each Lamed Wufnik learning of his importance, subsequently dying and being replaced by another. However, nothing is indicated in the performance notes.

Each player has five instruments written on a two-line staff, and well as “+” and “o” notations to indicate where or how the instrument is to be struck. Each of the three parts is equal in difficulty but challenging to prepare as an ensemble due to several rhythmic complexities. Utilizing a moderately portable instrumentation, “The Lamed Wufnik” would be a fine addition to any collegiate percussion ensemble program.