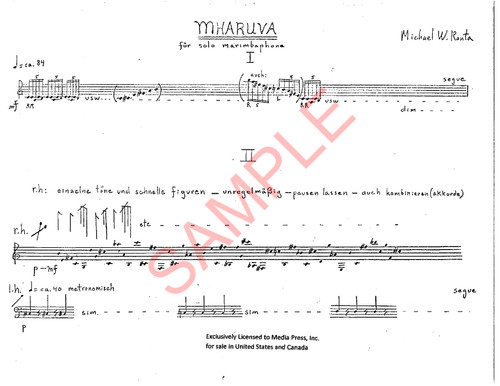 Composed in the late 1970s and recently acquired by Media Press Music, this 12-movement work for marimba is meant to be played continuously (unless a pause is indicated) and requires a bit of homework before putting the mallets on the instrument. In addition to translating several foreign terms (mostly in German), a performer must understand the nature of each movement, which varies from minimalistic overlapping figures to fast, rhythmic gestures that are played independently by each hand in a seemingly random pattern, and how each movement fits into the big picture of the work’s entirety.

Melodically, the composer displays avant-garde tendencies one typically finds in instrumental concert music of the 1970s: half-step resolutions displaced by an octave, tritones, and figures clustered together in groups separated by random rhythmic space.

Marimbists must be adept at four-mallet playing and facility while being comfortable with shouldering a hefty amount of the “compositional” work, as many of the musical choices (repeating figures, melody chosen from a set of notes, suggested rhythmic ideas, etc.) are left up to the interpretation of the player. As a result, the composer states that the choices of the performer could yield a performance that might last anywhere from 12 to 40 minutes.

This challenging piece seems deceptively easy upon first glance. Once performers start digging into it, they will find that there is a lot more music to be extracted from the innocent-looking handwritten notes on the page.