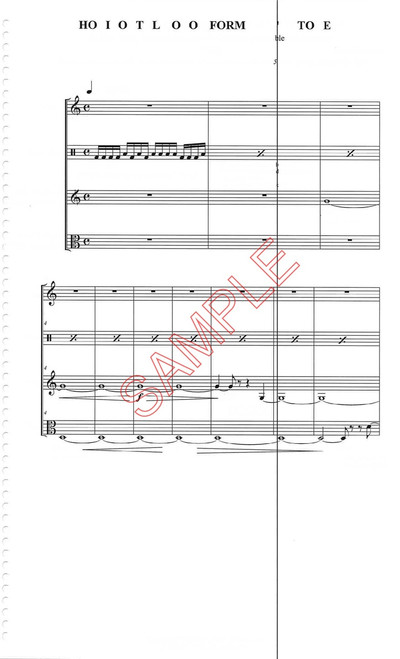 Each of the HORIZONTAL COLOR FORMS (HCF) pieces deals with the synergetic combination of individual parts composed one at a time in a horizontal manner. These pieces all result from pre-determined structures and processes that are the result of improvisational composition using computer sequencing. The horizontal aspect refers to the process of composing each line completely through while being aware of the other parts, but allowing the parts to be free of each other; a process of "real time" composing and a certain amount of randomness. All of the pieces' pitch structures are constructed from the simultaneous layering of 12-tone rows. These rows are chosen for their tonal/modal relationships and combinations and are stretched out over long durations through repetition of the individual tones (this repetition relating back to Arnold Schoenberg's original concept of 12-tone theory). The resulting sound is of overlapping harmonies that can be heard as an apparently static surface of sound with a flux of textural elements and overlapping dynamic patterns beneath (musical effects at particular points: crescendos, rhythmic contrast, accents, instrument entrances, etc). The harmonic textures create the color aspect of the music and are a constant flow of transformation and change within this "stasis in motion". The HCF compositional process produces a self-generating, horizontal harmonic flow that almost exclusively avoids vertical block harmonies in favor of gradually transforming tonal/modal lines and layers. These qualities create an atmospheric, aural landscape that can be compared to some 20th century minimal, early renaissance and baroque music, serving on an intense appreciation level or as an environmental listening experience. All of the works in this series reflect an interest in creating pure, absolute music that is derived from pre-determined musical systems within a large-scale structure based upon the combination and simultaneous layering of the 12-tone rows. Harmonic and rhythmic interplay is the focus of these pieces with melody, at times, being a subsequent result. The self-similarity and intended ambiance of the music may also create a suspended time frame effect for the listener. The HCF concept is based on the mathematical principle of self-similar objects. A self-similar object is exactly or approximately similar to a part of itself, e.g., the whole has the same shape as one or more of the parts. Many objects in the real world, such as coastlines show the same statistical properties at many scales. The HCF musical processes can be seen as analogous to this principle because the pieces' resulting textural structures consist of many instances of the same or similar material.

Hannay, Roger- Modes of Discourse, for flute, violin, and cello

Kowalski, Michael- bringing in the sheaves, for flute solo

Henry, Otto- The Tyger, for mixed chorus, a capella

Henry, Otto- Absalom, My Son, for mixed chorus and piano