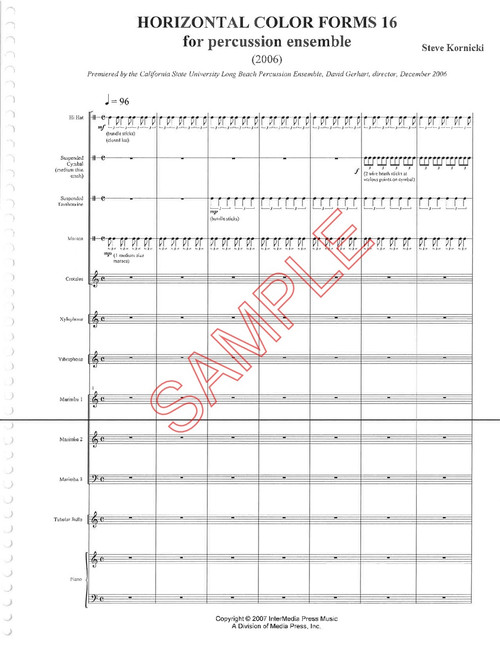 For 12 percussionists. Each of the HORIZONTAL COLOR FORMS (HCF) pieces deals with the synergetic combination of individual parts composed one at a time in a horizontal manner. These pieces all result from pre-determined structures and processes that are the result of improvisational composition using computer sequencing. The horizontal aspect refers to the process of composing each line completely through while being aware of the other parts, but allowing the parts to be free of each other; a process of "real time" composing and a certain amount of randomness. All of the pieces' pitch structures are constructed from the simultaneous layering of 12-tone rows. These rows are chosen for their tonal/modal relationships and combinations and are stretched out over long durations through repetition of the individual tones (this repetition relating back to Arnold Schoenberg's original concept of 12-tone theory). The resulting sound is of overlapping harmonies that can be heard as an apparently static surface of sound with a flux of textural elements and overlapping dynamic patterns beneath (musical effects at particular points: crescendos, rhythmic contrast, accents, instrument entrances, etc). The harmonic textures create the color aspect of the music and are a constant flow of transformation and change within this "stasis in motion". The HCF compositional process produces a self-generating, horizontal harmonic flow that almost exclusively avoids vertical block harmonies in favor of gradually transforming tonal/modal lines and layers. These qualities create an atmospheric, aural landscape that can be compared to some 20th century minimal, early renaissance and baroque music, serving on an intense appreciation level or as an environmental listening experience. All of the works in this series reflect an interest in creating pure, absolute music that is derived from pre-determined musical systems within a large-scale structure based upon the combination and simultaneous layering of the 12-tone rows. Harmonic and rhythmic interplay is the focus of these pieces with melody, at times, being a subsequent result. The self-similarity and intended ambiance of the music may also create a suspended time frame effect for the listener. The HCF concept is based on the mathematical principle of self-similar objects. A self-similar object is exactly or approximately similar to a part of itself, e.g., the whole has the same shape as one or more of the parts. Many objects in the real world, such as coastlines show the same statistical properties at many scales. The HCF musical processes can be seen as analogous to this principle because the pieces' resulting textural structures consist of many instances of the same or similar material.

In this 71⁄2-minute work, Steve Kornicki has created an entire compositional process built around predetermined structures and processes that are the result of improvisational compositions using computer sequencing. For each of the 12 parts, every instrumental line was composed individually before it was added to the score.

Looking at the score in its totality, there are three basic categories with which one can define an instrument’s role. The first is that of a rhythmic background, which is carried by the hi-hat, maraca, cymbal, and tambourine. Each of these parts plays a unique, single one-bar pattern that lasts for almost the entire length of the piece, with some dynamic fluctuations along the way. The second category is pointed definitions of tones that sporadically appear throughout the work, played by the piano, chimes, and crotales. The third category is the harmonic and melodic waves of notes that are played with repetitive rhythms, and are very patient with the pace with which they change notes. These parts are played on the marimbas, vibraphone, and xylophone, and they shoulder the bulk of the weight, in terms of the trajectory of the character and “story” of this piece. Kornicki wrote each of the mallet parts as a 12-tone row that is related to the others, in that from the original row in the Marimba 1 part, the others are transposed up or down, and at times even played as a variation.

One point of interest is that while these tone rows are played, they might stay on one repeated note in the row for 10 to 20 measures before shifting to the next note. As these 12 musical lines weave in and out of each other, moving from the foreground to the background of the texture, the resulting synthesis is very trance-like, ambient, and persistent in its morphing nature. When the notes in the tone rows change, the resulting pitch blends consist of notes that are, mostly, a major second or perfect fourth apart. The composer also creates interest by shifting octaves and undulating the dynamic interplay with a random sense of order.

From a player’s perspective, the only “chops” required to pull off a great performance will be ones that require mental focus when playing a part that doesn’t change often, while still maintaining a healthy blend and balance with the rest of the ensemble. All in all, this piece has appeal, as it presents a different type of art when compared to most standard percussion ensemble pieces.