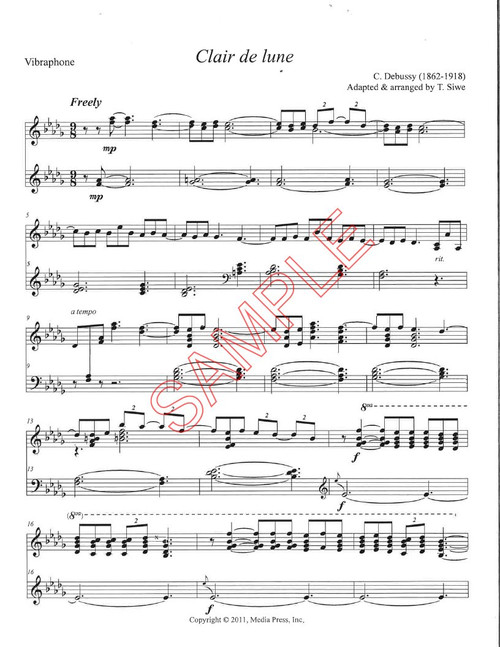 Claude Debussy’s “Clair de lune” is one of the most widely recognized and popular piano pieces of all time. It has been adapted for many different instruments over the last hundred years and is an audience favorite. Thomas Siwe’s vibraphone arrangement is a good one, as it matches the sustain and flowing quality of the original piece. This arrangement is not of the full piece, but is a shortened version containing the most recognizable parts that fit best on vibraphone. The notation is very clear and makes full use of four mallets. The original piano piece uses chords with many notes, and Siwe gets around the limitation of not having ten beaters by utilizing the sustain of the vibraphone pedal and breaking up the chords. There is almost no dampening writ-ten into the score, and the performer will need to have a good grasp of vibraphone mechanics, as well as the color of the original, to know where to dampen. “Clair de lune” is straightforward as far as vibraphone technique with mostly block chords and melody moving on the top line. Pedagogically it is a good study in four-mallet chordal playing, especially with the D-flat major key. Be-cause this is an abbreviated version of the piece it would work well as an encore to a recital or in a situation where there are time constraints.

Percussion: A Course of Study for the Future Band and Orchestra Director - 2nd edition - Student Workbook

Percussion: A Course of Study for the Future Band and Orchestra Director - 2nd Edition - Instructor's Manual