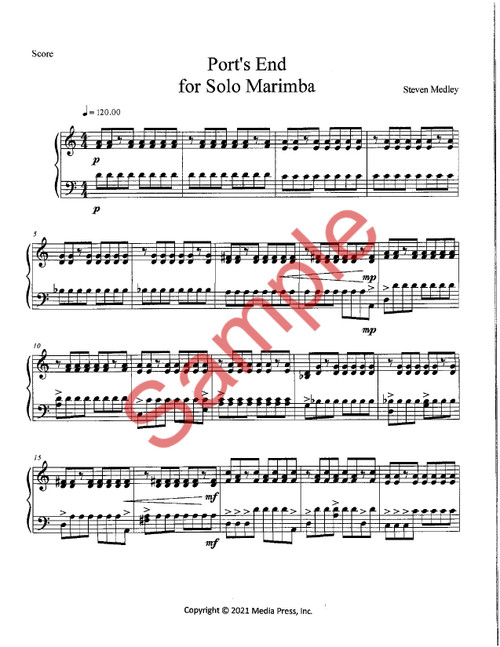 Steven Medley is a composer of primarily electronic music who on occasion dabbles in writing for percussion. In “Port’s End,” Medley deviates from electronic music with this four-minute acoustic solo for low-A marimba. This piece requires four mallets and shows an awareness of the marimba idiom. At the same time, “Port’s End” raises several questions. Who is the intended per- former? What is the meaning of the title? Has the piece been performed by a human performer?

Upon first looking at the score, the reliance on a repetitive, strophic chord progression coupled with the double vertical dominated textures make this reminiscent of intermediate, often pedagogical, solos such as “Rain Dance.” However, after playing through the solo, I found several moments that may prove challenging to the intermediate marimbist, such as quick interval shifts, rapid rhythms with hands in different registers, and repetitive patterns with slight harmonic and texture changes, all of which can be tricky to execute. At the same time, the piece largely lacks expressive notations such as phrase markings and several of the idiomatic beaming conventions highlighting musical layers that we expect in pieces written for more advanced performers. Furthermore, there is no description or program notes about the piece, which given the previous, does little to aid the performer.

However, if the accents are exaggerated and the remaining notes are interpreted as tenuto, a second layer appears revealing an interesting compositional idea that is worthy of exploring. At the marked tempo, bringing this interpretation to light would be difficult, as the accents are often marked over dyads requiring independence between mallets in the same hand. However, if accomplished, the resulting texture highlights an angular melody that jumps between hands and reveals a lilting motive that is perhaps hinting at the sea or, more comically, a dwindling digestif. Regardless of the piece’s meaning, the vagueness of the score provides an interesting opportunity for a more advanced player to craft an interpretation of a piece that, while not technically demanding, would require a convincing musical interpretation to bring to life.

Given my affinity for low-A marimba solos, I think “Port’s End” would be an interesting addition to a solo recital program. It has potential to provide a moment of repose on a high-energy program or simply exist for the benefit of amplifying new voices within the percussion repertoire. Lastly, given its pleasing and repetitive harmonies, it would provide an interesting opportunity for collaboration with choreographer and or dancer.

Kresky, Jeffrey- Through A, for solo marimba (Digital Download)

Barnhart, Michael- And who has thee is mad, for percussion trio and tape (CD) (Digital Download)

On and Off the Score