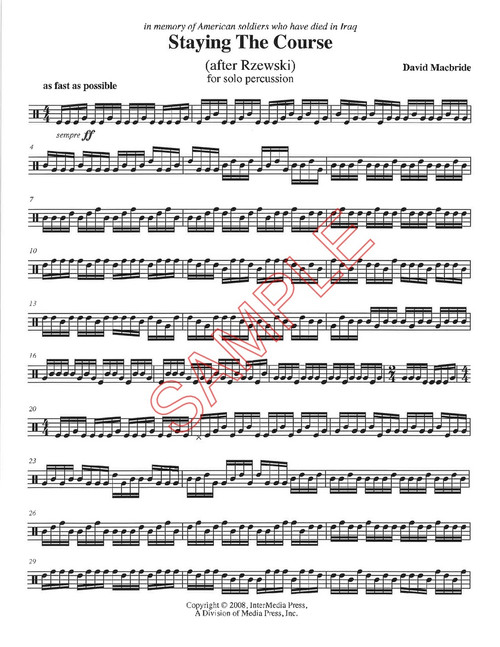 For solo percussion, includes one score. Staying the Course (after Rzewski) is dedicated to the memory of all of the American soldiers who have died in the War in Iraq. Each note represents a life lost;the total number of notes played equals the number of servicemen and women who have been killed in this tragic war. This piece was inspired by Fredric Rzewski's "Coming Together."

This unique work is written for a multiple percussion setup that includes five drums (low to high with tight heads that sound like gunshots), a low sound (free choice, different than drums), and a high-sound (free choice, different than drums). At first viewing of the sheet music, one might be put off by the fact that it appears to be nothing more than six pages of solid sixteenth notes with no dynamic contrast. But the composer has written a powerful tribute to the memory of all of the American soldiers, men and women, who died in the War in Iraq. In fact, there are 3,354 total notes in the piece, each representing a soldier who died in the war. If one understands this prior to hearing the piece, it becomes a powerful depiction of the tragedy of war and the amazing sacrifice our soldiers have given for freedom. The “(after Rzewski)” part of the title refers to a composer of the piece “Coming Together,” a similar minimalistic piece involving constant sixteenth-note patterns with a narrator reciting, in a repetitive manner, a letter of Sam Melville who was an inmate in Attica prison. While “Staying the Course” has no narration, the overall effect is similar. As music, I must admit this kind of music, and most minimalistic music, is not my cup of tea. But one cannot deny the power of what this piece represents in a graphic way.

As Before: Solo Percussion Music of David Macbride