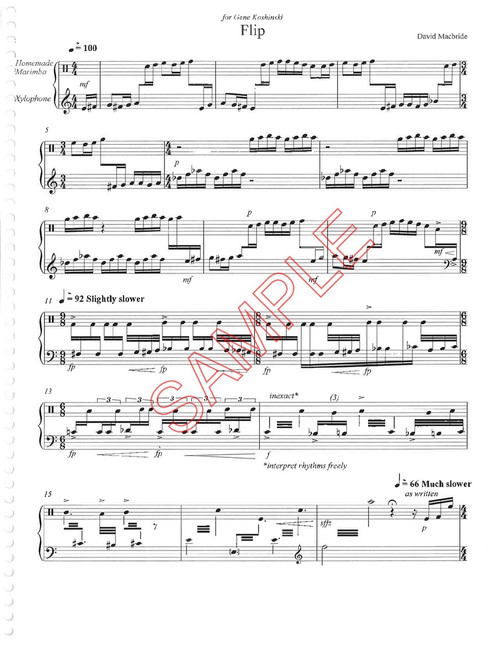 For solo percussion by David Macbride. This work explores the sonic possibilities of a homemade marimba paired with xylophone. The title implies something interesting about the form of the piece.  ca 3'

Commissioned by Gene Koshinski for a recital spotlighting two-mallet keyboard repertoire, David Macbride gives us “Flip” for xylophone and homemade marimba. The homemade marimba in question is a 13-bar instrument whose building instructions are provided with the score. The piece was originally written for a 4-octave xylophone; however, there are ossai directions provided so the piece can be played on a standard-size instrument. The piece is structured in a straightforward manner: trading between sections of strict notation and those that offer a certain degree of interpretive freedom. In the beginning of the work, Macbride presents simple, stepwise melodies in a call-and-response between the two instruments. As the piece progresses and these motifs are revisited, he adds density to the lines through either having notes alternated between the instruments or making them a series of double-stops. Between the sections of strict notation, there are two portions of the work where the performer is given artistic liberty. In the first, the xylophone repeats a two-measure ostinato pattern, and a new note of the player’s choosing is added from the marimba at every repetition. The other is a section of notated rhythms and contours that are echoed between the instruments. In this section, the option is also offered to “flip” the parts so that the marimba lines are played on the xylophone and vice versa. Rhythmically, the piece is uncomplicated, mostly comprised of sixteenth notes with a few triplets appearing. The greatest challenge lies in the dexterity required to perform the work. Besides the player needing to switch quickly from one instrument to the other, there are also several sixteenth-note gestures that must be played with one hand. This also occasionally includes grace-note figures and octave leaps. This work is well thought out and will exercise the physical chops and the improvisational and interpretive skills of the performer. It is best suited for an upper-intermediate to advanced keyboardist who is able to make the two keyboards sound as if they are one large instrument.

Macbride, David- Bells of Remembrance, for glockenspiel, vibes, and piano