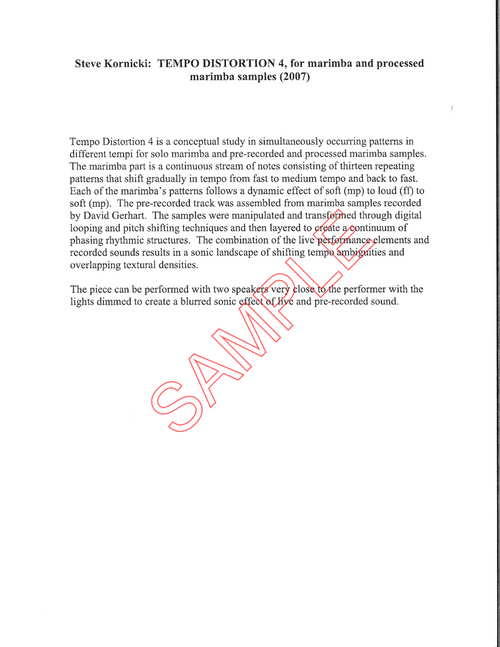 Tempo Distortion 4 is a conceptual study in simultaneously occurring patterns in different tempi for solo marimba and pre-recorded and processed marimba samples. The marimba part is a continuous stream of notes consisting of thirteen repeating patterns that shift gradually in tempo from fast to medium tempo and back to fast. Each of the marimba's patterns follows a dynamic effect of soft (mp) to loud (ff) to soft (mp). The pre-recorded track was assembled from marimba samples recorded by David Gerhart. The samples were manipulated and transformed through digital looping and pitch shifting techniques and then layered to create a continuum of phasing rhythmic structures. The combination of the live performance elements and recorded sounds results in a sonic landscape of shifting tempo ambiguities and overlapping textural densities. The piece can be performed with two speakers very close to the performer with the lights dimmed to create a blurred sonic effect of live and pre-recorded sound.

**NOTE: To hear a performance, or better yet, BUY A COPY from iTunes, copy & paste the following address into your browser:      https://itunes.apple.com/us/album/tempo-distortion-4-single/id794740030

“Tempo Distortion 4” is a two-mallet marimba solo with tape accompaniment. The piece is designed to blend the live acoustic performance with the prerecorded processed marimba samples so that the two parts weave together to “create a blurred sonic effect of live and prerecorded sound.”

The written marimba part is not terribly difficult; it consists of continuous eighth notes in repeating patterns. The artistry of the piece lies not in the technical control of the notes, but rather of the changing tempo and dynamics. In order to blend with the prerecorded sounds, the tempo control needs to be precise and the dynamics played with sensitivity and an ear constantly tuned to the shifting timbres of the electronics. Further musicianship brings out melodic elements in the marimba part itself.

The score is clear and easy to read, and it comes with a CD containing the processed marimba samples. The performance instructions are brief but informative. While clearly electronic, the processed marimba sounds aren’t so processed as to be grating to the ear, and they are still able to merge with the live instrument. “Tempo Distortion 4” would be an excellent introduction to performing with electronics for a percussion student, or for performers wanting to add an electronic element to their concert without needing a lot of equipment.—Marilyn K. Clark Silva, 2020