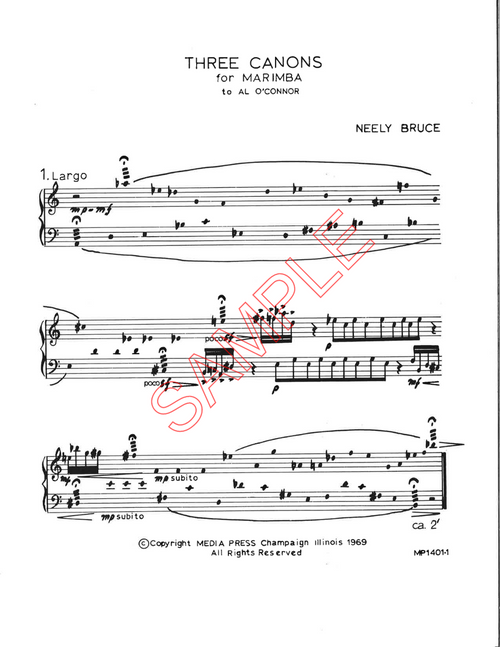 For solo marimba. Bruce's Three Canons is a two mallet solo for marimba, in three movements, of moderate difficulty. Each canon presents the performer with unique compositional problems. Canon number two has empty bars in which the performer is asked to create additional material according to the composer's instructions. The third canon utilizes 'chance' procedures to realize maximum variations. Duration: ca. 9'

Written in 1969 but newly available, this two-mallet solo for marimba takes on the harmonic and melodic character of the “contemporary” music of its time, and relies heavily on the use of tritones, sevenths, and intervals that resolve with octave displacements. This nine-minute work is composed of three movements (slow- fast-slow) that vary in terms of compositional style and level of artistic interpretation required.

The first movement is comprised mostly of stemless noteheads interspersed with rolled notes and a few figures of overlapping eighth notes. The character is sedate and hints at tonal ideas rather than a memorable melody. The second movement is written out with obvious structure (metered rhythms, time signatures, etc.) but is peppered with blank measures in which the performer has to write out melodic ideas for the beginning of the movement that get recycled in retrograde towards the end. The third movement incorporates chance operations where the performer is given a stave of 13 noteheads and plenty of instructions with which to choose from when preparing a performance.

As with much of the classical/contemporary solo music written during that time, this work has structure, depth, and meaning that might not be evident upon the first reading, but that will emerge after time is spent with the music and the instrument.

Macbride, David- As Before, for solo marimba (Digital Download)

Bruce, Neely- Untitled Piece No. IV, for trombone and percussion