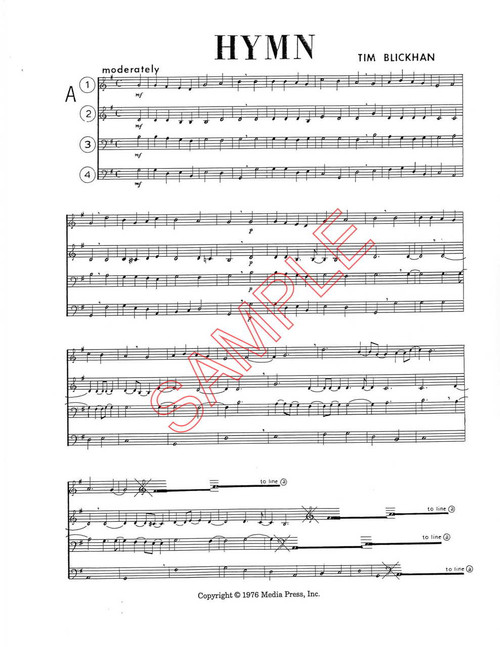 “Hymn” is essentially a one-trick pony, but at least it’s a neat trick. The work begins with a straightforward presentation of the hymn “Praise God from Whom All Blessings Flow” that starts to crumble and break down as the four voices begin to separate, at first rhythmically, and then eventually harmonically as well. This melting away of familiar material proves simply to be the piece’s introduction, as the heart of the piece is an aleatoric middle section that allows for each performer to interpret several systems, in any order, tempo, clef, and (within given parameters) key. After sufficiently exploring this inevitably polytonal material, the voices resynchronize for a brief return to the previously quoted hymn, which serves as the conclusion to the work.

There is nothing particularly percussive about “Hymn,” except that it could be performed by an ensemble comprising one or more pitched percussion instruments. I am not personally familiar with the oeuvre of the piece’s composer, Tim Blickhan, but some cursory research gave me the impression that he is best known for his religious and secular choral writing, and “Hymn” seems to most properly belong to that genre. As such, I would suggest that the most effective percussion realization of this piece might be with a marimba orchestra, wherein the homogeneity of several softly rolled rosewood bars might best allow for the choral blending that is implied in the piece’s construction (as opposed to the unavoidable creation of timbral tiers produced by a fully-fledged keyboard percussion ensemble with all sorts of woods and metals present).

This piece could serve as a useful and educational tool in exposing college freshmen to the concept of aleatory, or as a fine addition to an ensemble program in need of a piece that has the potential to be harmonically adventurous without requiring an overabundance of dedicated rehearsal time.

Blatter, Alfred- A Dream Within a Dream, for tenor, piano, and piano interior (Digital Download)

Baird, James- A Stroll on the Bottom of the Sea, for three percussionists (Digital Download)