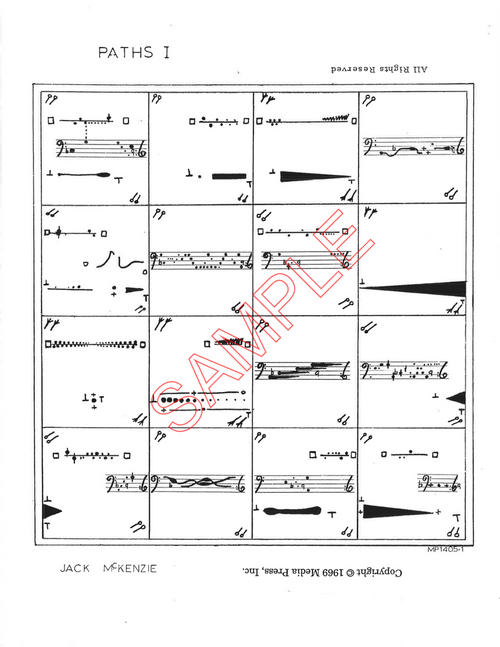 For solo percussion, includes score. A single card provides the percussionist with 16 squares of musical information. The one page graphic score can be easily realized by any level of player. Instruments needed: four timpani, two tom-toms and suspended cymbal. Duration: variable

Jack McKenzie was a leader in the early formation of Percussive Arts Society. Not only was he engaged in PAS, but he was an asset to future-thinking in percussion composition and the intermediate set of percussion repertoire that connected traditional compositional techniques with those of such composers as Stockhausen. McKenzie’s “Paths I,” composed in 1969, was recently published by Media Press Music. Scored for four timpani, two tom-toms, and suspended cymbal, “Paths I” utilizes nontraditional graphic notation reminiscent of Stockhausen and Smith-Brindle. There are 16 blocks of notation, each lasting 5 to 15 seconds. Whatever the performer decides upon (in the time-length of each compositional block) should remain consistent. In the prefatory remarks, McKenzie states, “A performance consists of any two complete, different paths through all fields.” Thus, the performer also becomes partly the “composer” in the choices of reading the 16 blocks—perhaps in a process of left to right, right to left, or perhaps up to down. The compositional score is contained in one page and could provide a pedagogical linkage with more demanding and/or lengthier multiple percussion solos.