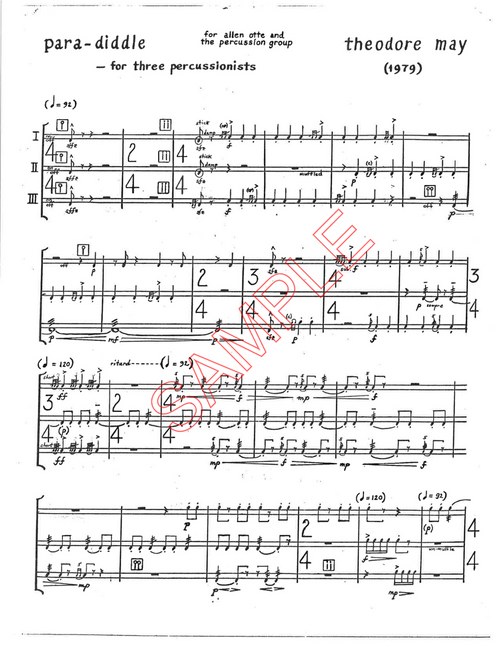 In 1979, Ted May composed a piece called “Para-Diddle” for three drummers. When interviewed about this work, he commented,” It was a commission to write a piece for snare drums – I was ensnared, so to speak, in that instrumentation. It presented a real challenge! I began by making an observation: that the snare drum is the most ‘linguistic’ of all instruments – meaning that more than any other instrument, the snare drum betrays the socially sanctioned uses to which it has been put: the parade, the military, the dance band; but especially the military. You see, composition is a way of defining reality.”

Subtitled “a reflection upon the pertinaciousness of the Old…,” “Para-Diddle” is a trio written for Allen Otte and the Percussion Group. Each

player has 3–4 drums and reads a score filled with sound/technique-specific notation. There are no less than six different implements used and close to 10 different sounds indicated by different symbols and noteheads. This alone would take a little time to adjust to, but it is not an insurmountable task.

The score is sectioned off clearly with many instructions from the composer regarding the mood or interpretive basis of each section. Additionally, many tempo changes happen instantly and could prove challenging to coordinate cleanly between players. All of this adds up to a musically satisfying piece that explores the sonic possibilities of the snare drum by experimenting with size, implement, and playing area.

I would recommend this piece for an advanced percussion ensemble concert or recital. Diving into and decoding the notation will be time-consuming in itself before even learning the notes.

May, Theodore- Para-Diddle, for percussion trio

May, Theodore- Para-Diddle, for percussion trio