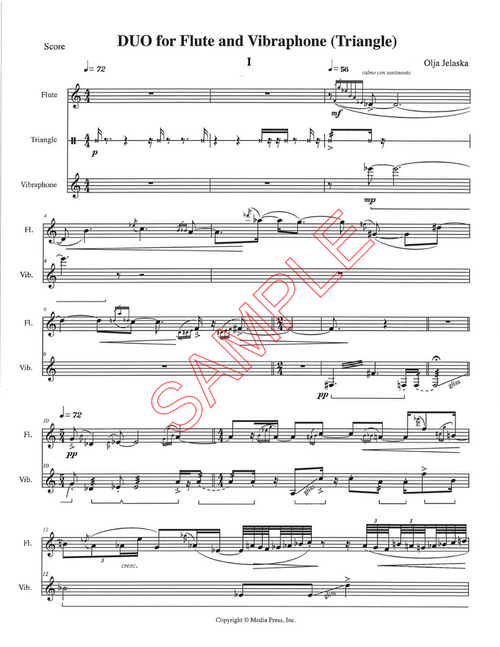 Includes score and parts. Featured at PASIC 2006 Focus Day, DUO consists of three movements. Each movement is announced with the appearance of the triangle. The third, shortest movement is linked with the second one without pause. The basic idea is a kind of dialogue between the two instruments, as an imaginary conversation with different moods, harmonies and disharmonies between these two 'living creatures' - flute and vibraphone. The piece was written in 1998.

This piece is certainly worth its metal. Apologies for the pun aside, it is always refreshing to see unique instrument combinations in percussion repertoire. The duet is structured in three short movements, with the last movement played attacca. It calls for an adept flutist and mature percussionist who can handle the unique demands that its rhythmically dense and interdependent polyphonic texture require. The flutist is asked to execute many rapid figurations as well as common extended techniques such as flutter tonguing. Similarly, the percussionist is asked to manage rapid four-mallet passage work as well as a few sections that require quick shifting and notable technical demands. “Duo” often highlights the complementary metallic timbres through passages that call on the performers to be expressive, sentimental, dancelike, and jazzy with a highly chromatic harmonic language. This attractive offering comes with a score and parts that are clearly engraved. While the parts would be great for rehearsals, they would be less than ideal for performance, as they have difficult page turns in each movement. These criticisms aside, “Duo” offers a nice addition to the repertoire that would be well-suited for the advanced performer and would offer a wonderful opportunity for collaboration.