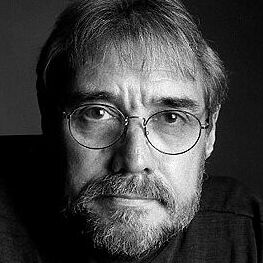 Dennis Eberhard (b. 1943 in Cleveland, Ohio, d. 25 May 2005, Shaker Heights) received his musical training at the Cleveland Institute of Music, Kent State University, the University of Illinois at Champaign-Urbana, and the Warsaw Conservatory of Music in Poland. He studied composition with Marie Martin, Frederick Coulter, Salvatore Martirano, and Wlodzimierz Kotonski, and electronics, computer techniques, and programming with Gordon Mumma and Herbert Brün. Mr. Eberhard received numerous grants and awards, including a Fulbright Grant, a Rome Prize Fellowship, two grants from the National Endowment for the Arts, five grants from the Ohio Arts Council, three MacDowell Residency Grants, the Cleveland Arts Prize, the 1990 Award of Achievement in Classical Music from Northern Ohio Live Magazine, and the 1993 Distinguished Alumnus Award from Kent State University.  While working in the Experimental Music Studio of the University of Illinois from 1969 to 1972, composing both concert music and music for film and theater, Mr. Eberhard also worked with John Cage and Lejaren Hiller, participating in the realization of their compositions Music Circus and HPSCHD. In 1973, he traveled to Poland under the aegis of the U.S. Department of State; residing there for two years, he composed six works and participated in several concerts of American music throughout Poland, culminating in a concert of his own music. At the close of his stay in Poland, his Dialogues II was performed at the Nineteenth International Festival for Contemporary Music "Warsaw Autumn." In 1977, Mr. Eberhard participated in the International Gaudeamus Music Week in Hilversum, Holland, where his Marginals received its first performance and was awarded Third Prize. A year later, the work was performed during the twenty-second "Warsaw Autumn." That same year, he won the Prix de Rome which allowed him a yearÕs residency at the American Academy in Rome. Since returning to the United States in 1980, Mr. Eberhard has written a variety of works, several of which have been performed internationally. Mr. Eberhard was a member of the board of Epicycle. He has taught at the University of Illinois, Western Illinois University, the University of Nebraska, Oberlin Conservatory of Music, and Cleveland State University, while lecturing widely on his own music at such institutions as the Cleveland Institute of Music, Cornell University, Penn State, the Cincinnati Conservatory of Music, the University of New Mexico, and the São Paulo State University (Brazil). His music is published by C. F. Peters, Media Press and Margun Music. Prior to his death, Mr. Eberhard was on the composition-theory faculty at Kent State University.